skip to main | skip to sidebar

Tis the season to FART

Tis the season for traveling to see family. A Flat-d.com pad can be a handy traveling companion. On airplanes especially.

It was on a flight to New Zealand that a Danish scientist had a bit of a lightbulb moment. Noticing changes in the air of his water bottle, and feeling just a little bloated after the journey, Jacob Rosenberg began theorising about the human body’s behaviour on something that happens to all of us, something we never speak about, and something we never want to hear or really smell for that matter: ‘why do we seem to fart more on planes?’.
Very simply, it is gas in our intestines that needs to get out, but how it builds up can come down to a range of factors.
As we go through our day we are swallowing in air doing basic activities like chewing food or drinking. This swallowed air, known as exogenous air, includes oxygen and nitrogen which gets absorbed into the bloodstream from the small intestine, but any excess needs to be expelled.
There are also plenty of bacteria doing their job in the colon of breaking down food which results in something called endogenous air. Depending on what you have been eating, the makeup of this will mostly be hydrogen, but it could also contain methane, and the stuff that adds that certain ‘je ne sais quoi’ stink aroma, hydrogen sulphide. But only 1% of the roughly 1.5 litres of gas we emit each day actually smells.
As you are no doubt aware, some foods you eat tend to make a difference on your flatus quota for the day with high fibre foods and undigested carbohydrates in sugars like fructose and sorbitol, starchy products like potatoes, high-sulphur items like garlic and onions, and cruciferous vegetables including cauliflower and broccoli making the difference.
As Rosenberg noted on that fateful flight to New Zealand, he saw changes to his water bottle. It had been “squeezed” after expanding in the low pressure and then crumpling back when the plane reached the airport.
“When we landed, my belly had grown. That led me to speculate what had happened. When I got back to work I discussed with two of my students, and we simply came up with the idea for the paper.”
It's really down to physics. The cabin pressure decreases, the air inside the bowel expands by up to 30% more than usual, and that needs to get out.
“Since there is only limited space in the large bowel, it is a natural consequence to fart,”
Posted by Franko at 2:01 PM No comments:

Lots of Flatulence - no problem for Flat-D.com

Use a Flatulence Deodorizer if you fart from 1 to 21 times a day.

Typically, adults produce about two pints of gas each day, which sneaks—or leaks—out via an average of 14 farts a day. If that number seems low to you, don't worry. It's apparently perfectly normal to pass gas up to 21 times a day.
Posted by Franko at 9:31 AM No comments:

A Covid mask for your Butt

Time for a mask for your butt, A flat-d.com pad can help.

According to the experts, Covid-19 could be spread through flatulence or farting, to us commoners. A lot of partners are now finding another reason to tell the bloke off for having a cheeky trump. They do advise ventilation in order to slow the spread of Covid so this only gives you more reason.

Ministers have reportedly pointed to evidence that Covid could be spread by people farting in confined spaces such as lavatories. One said they had read "credible-looking stuff on it" from other countries, though no government scientist is yet to produce conclusive findings on the matter. 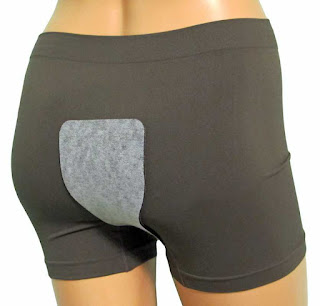 Posted by Franko at 6:42 AM No comments:

Some people call a Flat-D pad a gas patch.

Our product is much more than a patch.
It is a helpful remedy for gas odor.
After so many Christmas celebrations, it is very likely that we feel light and rather bloated. Although an indisputable part of the season is enjoying the emblematic and traditional Christmas dishes, and of course from one drink or another, it is normal for the body to suffer some consequences. Among the main affectations of course top the list those related to the functioning of the digestive system, the excesses of the season make us more likely to suffer from heaviness, inflammation, bloating and gas. Which is honestly most annoying. Based on this, we undertook the task of compiling 4 magnificent natural remedies for Eliminate these pesky digestive symptoms and survive the New Year’s Eve festivities with dignity.
1. Add turmeric to your daily diet
2. Reduce your salt intake and drink natural serums
3. Increase your potassium intake
4. Drink mint tea after every meal
Posted by Franko at 10:06 AM No comments:

Wear a Flatulence Deodorizer and not have any problems. Otherwise this is some good advice

Q: In the afternoons I often have very loud gas.

I do eat breakfast, but sometimes skip lunch. Different over-the-counter meds have been mostly useless. The flatulence happens throughout the evening. What can you suggest?

A. The first step in overcoming gas is to keep a “fart chart.” People can be sensitive to different foods. For many, legumes are the culprit. For others it is wheat or barley, especially if they are sensitive to gluten. Milk sugar (lactose) is another potential problem. That’s why keeping track of flatulence and food triggers can be helpful.

You didn’t mention whether you are taking any medications. A surprising number of drugs can trigger flatulence.

Posted by Franko at 7:04 AM No comments:

Farts smell bad, but a Flat-D pad can help

Flat-D.com pads are the most popular solution to remove that bad smelling gas odor.

There are numerous reasons why your farts may smell bad. “While working to digest food, the body makes several byproducts, such as hydrogen, methane and carbon dioxide,” Dr. O’Brien says. “When these gases are released from your body, they can cause odiferous farts.” Dietary decisions can play a role, i.e. particularly foul-smelling flatulence usually occurs when you eat fatty and unhealthy foods. And food allergies and/or sensitivities can make your gas smell.

Posted by Franko at 9:10 AM No comments:

Flatulence at the wrong time

A Flatulence Deodorizer by Flat-D.com can help with most smelly gas odor situations.

We all know the feeling. The telltale build-up of hydrogen and methane in your large intestine. The discomfort as the gases expand and the mortal dread that comes as the pressure builds. They want out. They’re going to evacuate, violently if necessary, from one end of the digestive tract or the other, as is nature’s way. But why now? Why here, in the middle of a job interview or the first meeting with your partner’s aristocratic parents?

Flatulence doesn’t care about your schedule, unfortunately. But it could be a lot worse than a burp over dinner or a bottom burp in an overpopulated elevator.

Posted by Franko at 9:13 AM No comments:

Promote Your Page Too